Club Comex is the loyalty program for Comex, the fourth-largest paint manufacturer and distributor in North America. Club Comex is open to all Comex customers and provides benefits that range from cashback and exclusive promotions to training and certifications.

With over 4,000 points of sale, Comex is North America’s fourth-largest paint manufacturer and distributor. Club Comex is the company’s loyalty program.

For years, Club Comex reached out to members with SMS campaigns to share information, offers, and discounts. SMS allowed Club Comex to reach a large number of people, but the text-only messages resulted in low clickthrough rates of just 2 to 3 percent.

Club Comex wanted a more engaging way to connect with customers—and one that was more representative of the colorful Comex brand. They decided to test RCS Business Messaging to share rich, visually-impactful and branded messages featuring images, audio, and video, and that allowed for interactivity with club members.

Together, the companies launched two campaigns to engage with Club Comex members across Mexico. The campaigns were spaced two weeks apart and ran for three days each.

The first campaign, Regalón Regalitro, was sales focused and offered customers a free liter of paint for every gallon purchased. Club Comex wanted to test the sales impact of sending customers messages with branded content and images as compared to text-only SMS.

The second campaign was a lead nurture campaign run in partnership with Mexico’s only interior design magazine, Sensaciones. The goal of the campaign was to inspire people to rethink their home decor. Club Comex sent members a series of messages with articles, stories, and design tips from Sensaciones and brought them to life with images, video, audio, and web links. 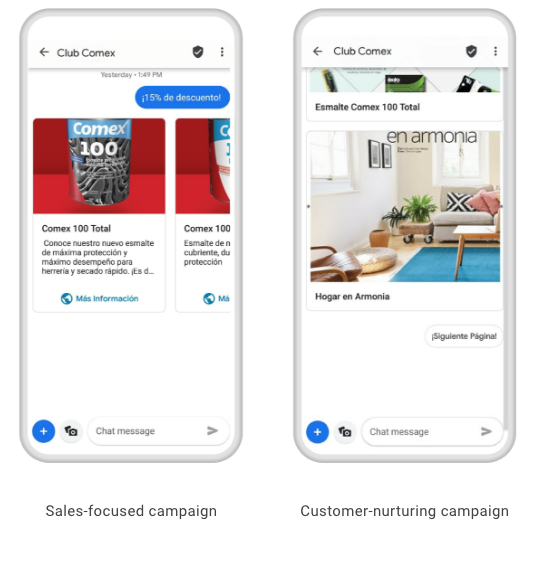 When Infobip and Club Comex analyzed the results, they saw that the first sales-focused campaign resulted in a 115 percent revenue increase over the previous year’s SMS campaign and a jump in clickthrough rates from 3 percent to 7.9 percent. The Sensaciones lead nurture campaign had no SMS comparison, but resulted in a clickthrough rate of 20.6 percent— approximately 10x the average SMS campaign performance.